The Dutch are experiencing the coldest spring since 1984. In fact, this years spring might be one of the coldest since 1901. This weather fact is reported as hard news by De Telegraaf, the largest newspaper of the Netherlands. Although this news fact might be true, it’s not news. At least, not to me.

Okay, why bother, you might think. Who cares?! Well, I don’t actually. But I think it shows the craziness of our 24-hour news cycle. News organizations seem to do anything to fill their websites with nice big headlines and since we like to talk about the weather…

Back in March, I started to collect some of these crazy weather records. Most of them were served as big news, including large images and big headlines on the homepage. 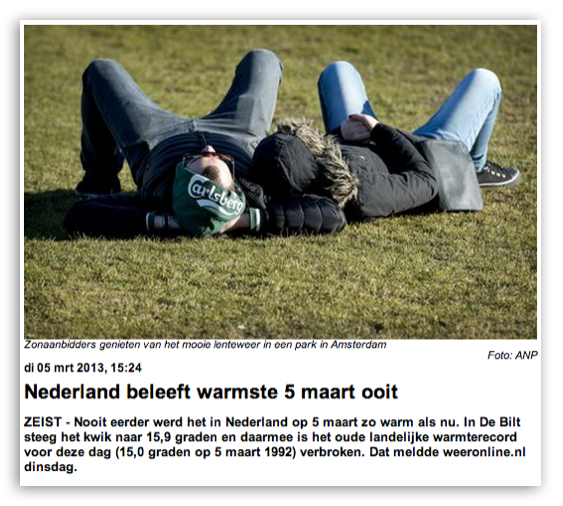 Temperatures in De Bilt (a Dutch town) rose to 15,9 degrees Celsius, which make it the hottest March 5th ever. My question is simple… what makes March 5 so significant? Why not talk about March 4? Or February 23? Or January 12? Is this just a random day and random record which allows De Telegraaf to make a nice headline? 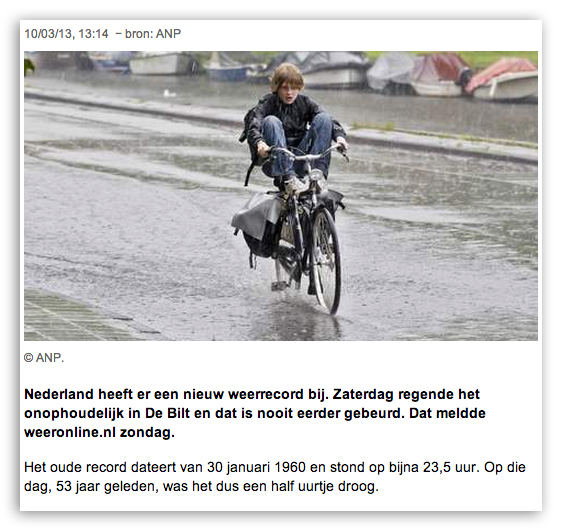 First of all, this is not a national weather record. After all, it’s De Bilt, the same town which also experienced the hottest March 5 ever. So, why are the Dutch so focussed on De Bilt? Well, it’s not just any town. It’s a small town (10.500 people) which happens to house the Royal Netherlands Meteorological Institute, which makes it important for weather facts. But… why should we be interested in their rain-record? And why read about it in a Dutch quality newspaper? 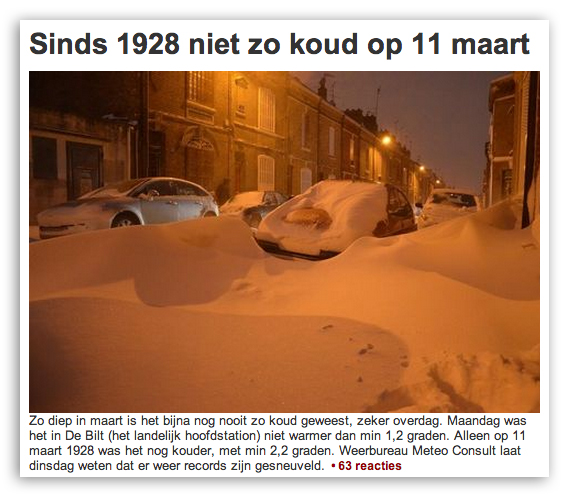 Nice, another random day and year. Why March 11? Why ‘1928’? But this random fact allows De Telegraaf to give this ‘news article’ the biggest headline and most prominent spot on their website for almost a full day.

March 13: “It’s never been so cold in this period of March” 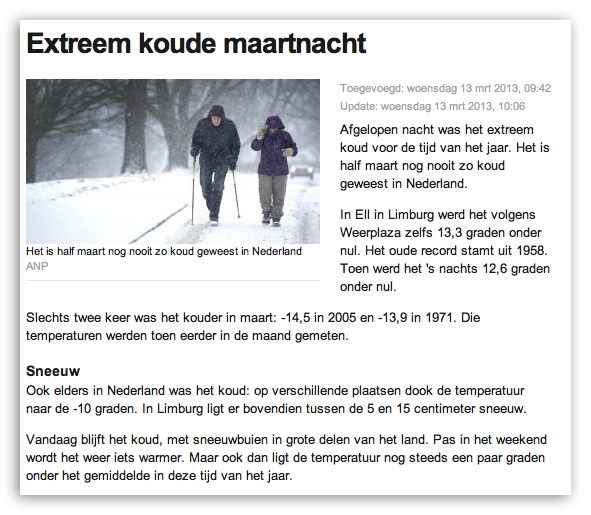 In March 2005, temperatures were down to -14,5 degrees Celsius. This March, temperatures ‘only’ dropped to -13,3. Unfortunately, that’s not enough to make it a weather record. But journalists at NOS are creative. The record in 2005 happened in early March. So, forget 2005… it’s never been so cold in this period of March, which means -13,3 degrees counts as a record as well. It’s a job well done. 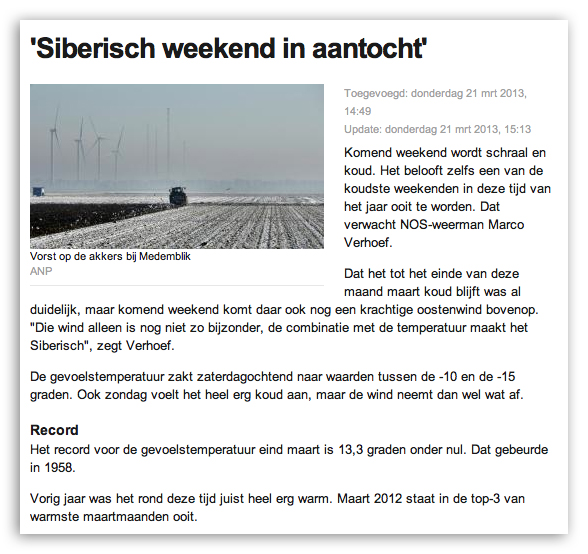 Again, NOS knows no weather records are broken. Still, they wrote quite a big news article about the extreme cold temperatures. “This weekend promises to be one of the coldest weekends in this time of the year”, according to NOS. This ain’t news. “This weekend promises to be…”? Come on, this is more like a weather preview, similar to how pundits talk about major sports events or politics.

Luckily, there’s De Telegraaf. Their headline reads “Coldest March in 25 years”. Great! They obviously found some hard facts, something the NOS article lacked. Let’s read on. “This month will probably be one of the coldest months of the past 25 years…”. Wait! Probably? … One of the? … This doesn’t match with their headline at all!

This wakes up AD, another newspaper. They finally realize news doesn’t have to be news these days. Instead, just bring it big, use quotation marks in combination with the words “possibly” and “one of the” and you’re done. 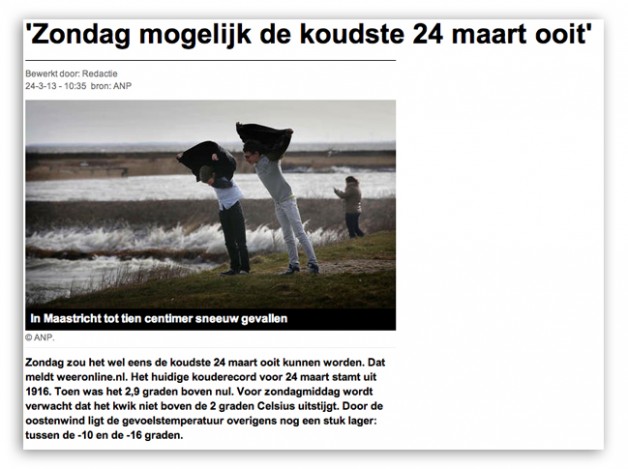 Ah, AD used both quotation marks and the word “possibly” for the article above. Need I say more? However, it makes me wonder… is it true? Did we in fact experience the coldest March 24 ever? Let’s check Dutch weather website Weeronline.

March 24: “A tenth of a degree too warm for a cold record”

Yep, AD was wrong. On March 24 1916, temperatures dropped to 2,9 degrees. This year, we briefly tipped 3,0 degrees which is not enough to justify a new weather record. But who cares. AD smartly filled their newspaper and many people, including me, had something to talk about.

Oh, before I forget, Weeronline did point out it’s the coldest March 24 since 1916. Let’s just assume 1916 is a very significant year for Dutch weather… 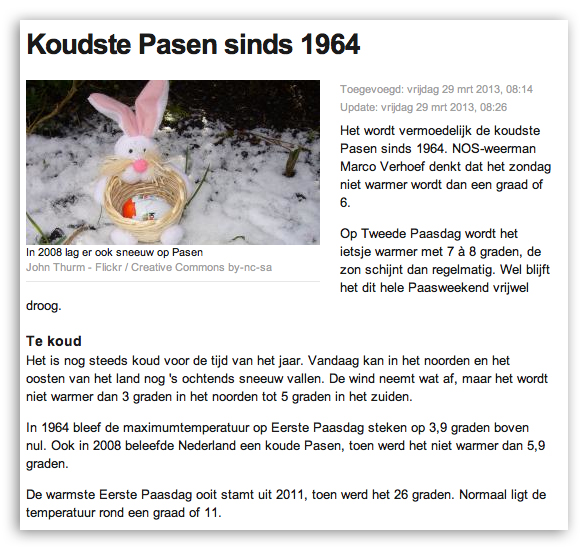 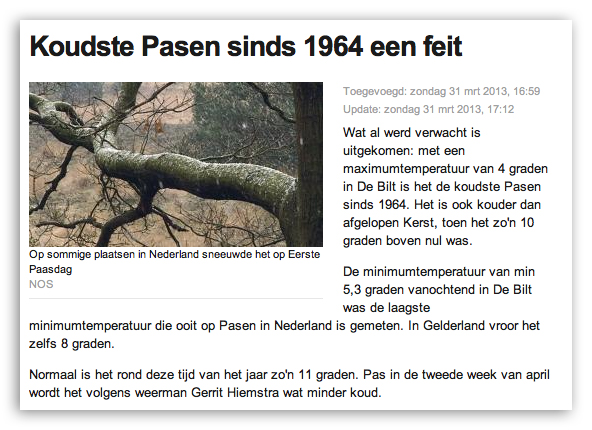 Yep, it’s true. On Easter morning, NOS proudly reports their predictions were correct… For which they used another big headline… smart…

This all happened in the past. Let’s focus on what matters most… which seems to be the future nowadays (why live in the present when you can also predict the future?). 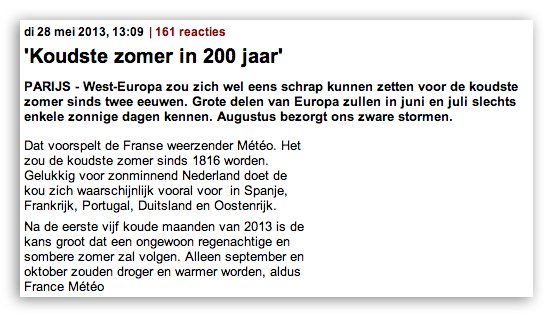 According to De Telegraaf, this summer could be the coldest in 200 years. Could be? … 200 years? … Yep, we’ve seen this before. This ain’t news, instead it’s speculation. Something to fill the newspaper with. According to the article, June and July won’t be that sunny. And August… well, prepare for some heavy storms. Hmmm, I guess this is thé moment to book a summer holiday to Spain, Italy or somewhere else sunny. Or… no, wait. The second paragraph mentions the cold summer applies to southern European countries only. Which means…

… I wasted another minute of my life by reading speculation about the weather, which was presented as hard news, but instead doesn’t even apply to my own country… Poor me.