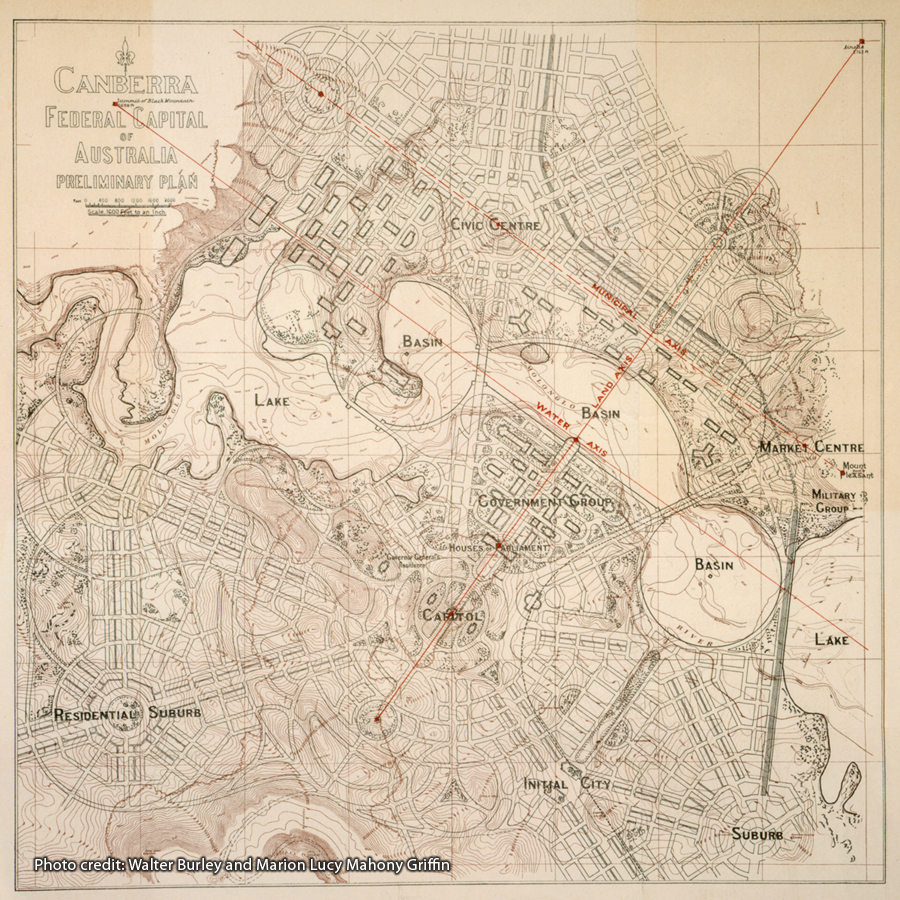 A new capital for Australia, part 1

A while ago, a friend and I participated in an international architecture competition. The task: Design a new capital for Australia. Unfortunately, we didn’t win (oh well, it was a longshot anyway). Nonetheless, I’d like to share our thoughts about this new capital with you.

Why does Canberra look the way it does?

It’s not that hard to figure out which factors influenced the 1912 design of Canberra. Old design documents mention the capital should “suggest grandeur” and “effectively symbolize a national capital”. Which makes sense. After all, back in 1912 Australia was a new country with little to no history (apart from the Aboriginals). They were in need of something that would unify them. A capital possibly?

The leaders of Australia hoped their new country would be a perfect democracy, a perfect country. They tried to reflect this on the nations capital, because this city could be the symbol for their new nation. This is exactly why Canberra is a perfect master planned city with plenty of parks and lots of public services. Ironically, because of its master planned characteristics, many Australians view their capital as a city unlike the rest of Australia. This is something which could be fixed with a new capital. 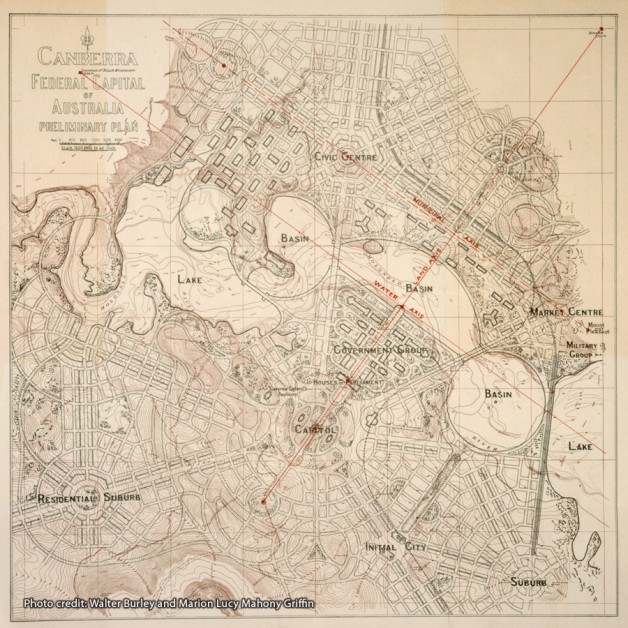 Does Australia need a new capital?

Tthe not-so-good feeling many Aussies have about Canberra doesn’t justify a new capital. Instead, there’re more compelling reasons, like the rise of the Internet, global warming, terrorist attacks and a global economic crisis. These are factors which influence our daily lives in a big way and couldn’t be more different than a hundred years ago (when Canberra was founded). This new reality brings new challenges and prompts questions like:

– Can Canberra be transparant and terror-proof at the same time?

– What does the rise of the Internet mean for government?

– Government grows bigger, while individualism is on the rise. How can a capital bridge this ever growing gap between individuals and the (mega) government?

In a way, the current Australian capital represents the old (check out the Canberra mega parliament building below). But times have changed. This all leads to a single question: Is a conventional capital like Canberra even capable of fulfilling her duties in this modern age? One could argue that a new capital is needed to represent the new and modern Australia. 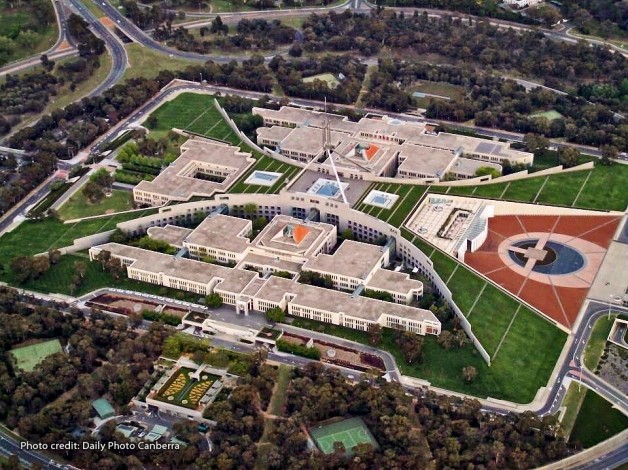 What is a capital

OK, so we might need a new capital (without the need for a new capital, there wouldn’t be an architecture competition anyway). But what’s a capital exactly? In my view, a capital is just a city… a place where a lot of people live, work, study and relax. But there’s one major difference between a capital and any other city. The capital is a symbol. A symbol of power and, for western countries, democracy. It’s the symbol for what a country is or wants to be. For western countries, this symbol is embodied by a parliament building, a home for democracy. Since Australia is a democracy, a parliament building should be the centerpiece of this new capital as well.

But this home for democracy can be more than ‘just a building’. It’s much more powerful when it embodies the era in which it’s built. Which is true for buildings like the US Capitol and the German Reichstag.

This parliament building embodies the era of democracy, which started just after the US became independent from Britain. Democracy is the reason why the US Capitol is built on a hill in the exact center of the city, thus visible throughout Washington DC. It shows everyone that the people are in power. Which is also why the US Capitol is much bigger than the White House, residence of its head of state (bigger = more power). Until then, this was something unheard of in other western countries. It’s not surprising why people regard the US Capitol to be a symbol of democracy.

The historic Reichstag with its new glass dome symbolizes the era of unity, and not just for Germany. Instead, it symbolizes the unity of the entire western world. Inside, graffiti from both Nazi and Communist soldiers is preserved, thus reminding everyone Germany won’t forget its history. The glass dome, which tops the Reichstag symbolizes the long wished for transparency of government. And, not coincidentally, it was designed by a British (!) architect, Sir Norman Foster. 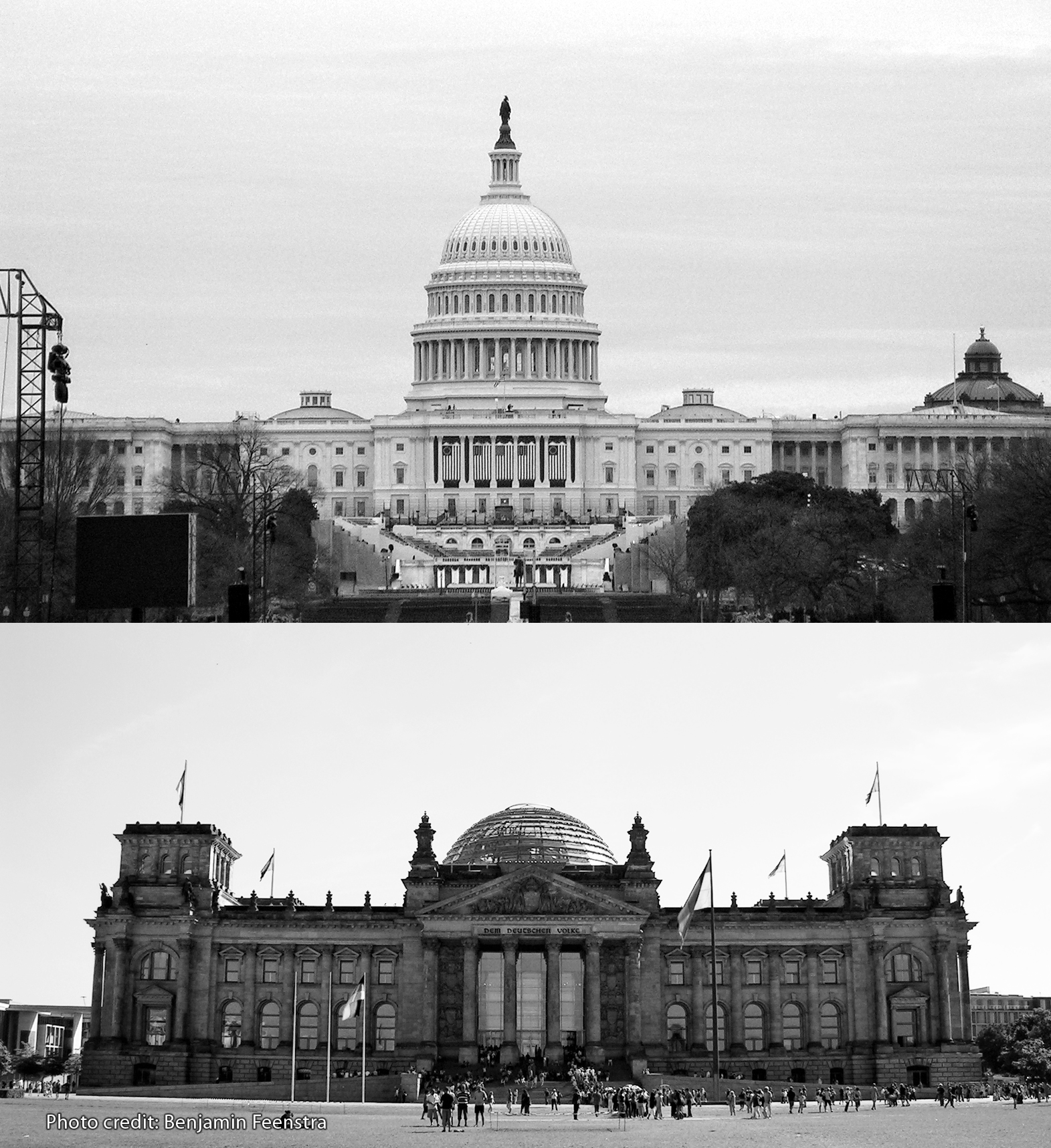 These two examples illustrate the era’s in which these parliament buildings were built. Currently, we live in the era of the Internet, which changed everything we know, including politics. Which prompts the question: Why not create a parliament building which symbolizes this era?

Where should the capital be located?

Well, that leaves us with one final important issue. Where to locate this new capital? That’s a tough nut to crack, since the size of Australia’s land surface is incredible. Still, the country is one of the most urbanized in the entire world. An incredible half of the population lives in just four (!) cities. Let me repeat that: Half the population lives in four cities! For the new capital, this could be an ideal situation. Why not situate the capital near these four cities, which allows the city to serve at least half of the countries population. And it’s easily doable, since there’s only 4000 kilometers separating some of these cities… hold on… did you say 4000 kilometers?

I guess that’s not gonna work.

Another option is to locate the capital in the exact middle of the country (near Alice Springs). However, this results in a natural barrier of thousands of kilometers for almost the entire population. That’s no good as well.

Apart from the everything mentioned above, constructing a new capital involves more than just erecting a parliament building. For a new, conventional, capital, an entire ecosystem of houses, offices, stores, entertainment and public services is needed. It takes some time to build, but ultimately this new city won’t be that different than Canberra. No problems will be solved, but a lot of money is wasted.

This is why we believe a conventional capital is not an option. Let’s go unconventional.

End of part one.