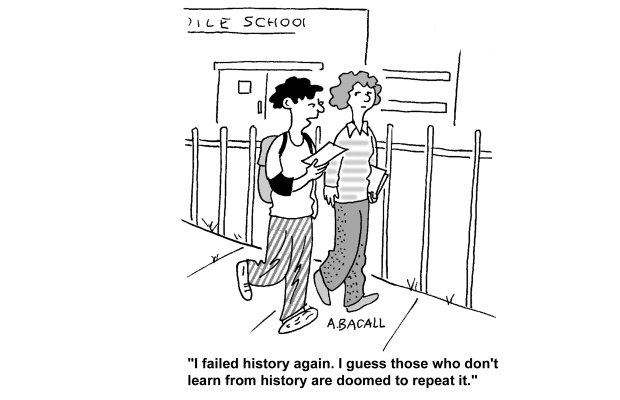 History, we know, is apt to repeat itself

Why does history continue to repeat itself? And, more importantly, why don’t we learn from the past to solve our current and future problems? It’s a question I ask myself regularly but find impossible to answer.

I wrote about putting the fun back into shopping and the end of the nightclub. In both cases history could solve a problem because it already happened in the past. Nonetheless, most people (in these cases retailers and nightclub owners) fail to learn from the past. They don’t see the solution, lack courage for big changes or hope their businesses won’t be affect by, let’s say, the rise of the Internet and/or economic crisis.

Even though I know (or believe) history repeats itself, I find it surprising to read articles which date back many years, but could be written today. Here’s an example. A couple of days ago I studied the phenomenon Niketown. At a certain moment, I came across an article describing the courage Nike had to open stores during a crisis. But the author wasn’t describing today’s economic crisis. He wrote the article twenty years ago. Nonetheless, the article remains so true, even today.

Because of the many similarities between their (Niketown) situation and the situation many retailers find themselves currently in, I want to share this 1992 article from CNN Money. It’s an interesting read. And pay attention to the last paragraph. Recently, a Dutch newspaper wrote about smaller Dutch cities having trouble attracting (a large number of) shoppers. Nike shows it’s possible to attract large numbers of shoppers despite being located in a ‘remote’ or ‘less-important’ city, in their case Portland.

Nike, it seems, is on to something. ”Today’s shoppers want to be entertained,” reports Madison Riley, a retail specialist for Atlanta-based management consultants Kurt Salmon Associates. ”Niketown is theater,” says Riley, ”and for retailers, that’s a key to the future.” Niketown is putting the fun back into shopping, and that, along with a commitment to first-rate service, is why it is our [CNN Money] Store of the Year.

Nike is bold in its timing and almost unique in its positioning: it has launched the store while the retail industry is faltering — U.S. retail sales have fallen from $186 a square foot in 1980 to $161 today — and showing no signs of rebounding. Most other retailers are offering consumers no-frills, find-it- yourself outlets or lookalike, cavernous concrete warehouse clubs. As with most fancy packages, though, this one carries a pretty price.

While athletic shoes and gear are widely discounted elsewhere, Niketown customers always pay full retail price. Nothing goes on sale — ever. Niketown is designed to dazzle you into paying $100 or so for athletic shoes, $120 for a nylon running jacket and $500 or more for a total ensemble that puts you in matching socks, pants, top and sweatband. ”Niketown combines the fun of Disneyland, the museum quality of the Smithsonian and the merchandising of Ralph Lauren,” announces Gordon Thompson, the store’s 31-year-old designer, who also worked on set ideas for the 1989 movie Back to the Future II.

There are signs that other retailers are following Nike’s lead. For example, outside Minneapolis, real estate developer Melvin Simon is building what will be the biggest shopping mall in the world — a combination entertainment and shopping center dubbed the Mall of America. Simon is betting that millions of shoppers every year will be pulled in by the pizazz.

Niketown’s popularity has been overwhelming, especially considering its location. ”Portland is not exactly the crossroads of the retail world,” quips Nike chairman and founder Philip Knight, 53. In the year since the store opened, an estimated 1 million people have shopped there.

You can read the entire article here.