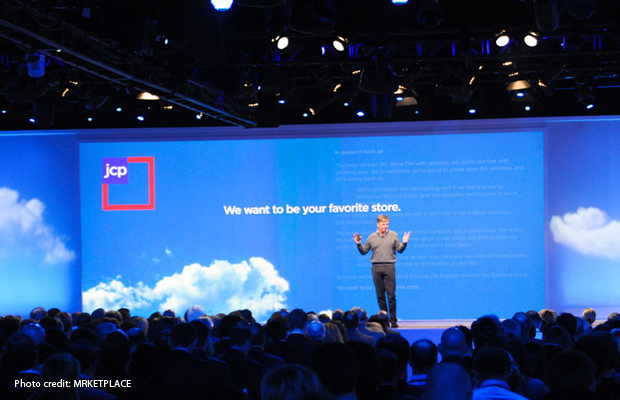 “They toured me through some of the ‘new’ JC Penney stores. I closed my eyes and realized this is a great department store… if it was 1995.” It’s a pretty bad thing to say about a store. And it’s not just anybody who said this. No, it’s JC Penney’s own CEO, Ron Johnson.

I guess things must be really bad when your CEO says these kinds of things about your own company. This leaves me with two questions. 1) Who is this guy and 2) what should a great department store look like?

He’s the guy who pioneered the concept of the Apple Store and the Genius Bar at Apple. Under Johnson’s direction, Apple’s retail stores achieved a record level of growth, exceeding a billion dollars in annual sales within two years of their debut. Last year, he left Apple to join JC Penney, a US department store, as its new CEO. He wants to achieve the same with JC Penney as he did with Apple.

I think it’s safe to assume this guy knows something about business and retail. And, more importantly, he knows what to do in order to turn JC Penney into a great modern department store. That leaves us with question two.

Huge assortments and one-stop shopping – Many ‘experts’ are confident the current retail model is broken. Physical stores will be replaced by online versions. Within years, all we do is shop online. Jonson disagrees. He quickly points out people thought the same when Apple launched the Apple Store. Which turned out not to be the case.

Physical stores are still the primary way people acquire merchandise, and he thinks that will be true 50 years from now. Ron Johnson sees no reason why department stores can’t flourish. They can be people’s favorite place to shop. They’ve got all these strategic advantages like the lowest cost of real estate, exceptional access to merchandise and scale to create enormous marketing power. Besides, people like stores with huge assortments and one-stop shopping. It’s just the way departments stores look, their lack of imagination and the way they engage customers.

Specialty stores – When people want a great product, they visit specialty stores like H&M, Nike or Zara. Shoppers are done with wading through “an endless sea of racks.” This is not just true for JC Penney. It’s a larger industry trend. Based on research about American’s shopping habits, it’s clear that specialty stores work. “In a world where the product we want is just a key-word search away, we’ve lost our tolerance for complexity,” Johnson said.

That’s why JC Penney’s plan includes creating 100 specialty stores within the department stores. The move expands on what Penney has already done, creating store-within-a-store areas where sales per square meter are three times higher than the average of the rest of Penney. Within four years, all department stores will be completely redone.

Main street and Town Square – The sea of outdated merchandising fixtures from the 1980’s will be replaced by a hundred specialty stores, essentially creating a small town. Just like any town, this means a street is needed. And that’s exactly what Ron Jonson created when he imagined the Main Street concept. Main Street will be the aisles that guide you around the store, passing all of these specialty stores. This Main Street showcases trend-right brands and so called experiences. The comparison with a local town doesn’t stop here. In the center of the store there will be a Town Square. What will this Town Square be? That’s still a secret. All we know is that Johnson said it contained “truly innovative thinking” and will be revealed in 2013.

While analysts think these changes are a “revolutionary approach to retailing” and “it will have other retailers waking up,” I think you could have seen these changes coming months ago. Because this approach to retail is essentially the same as Ron Jonson did when he pioneered the Apple Stores a decade ago. And Johnson freely admits he’s ‘stealing’ Apple’s floor plans from its retail stores.

Apple stores are split in two, Johnson explained. The “Red Zone” is where customers discover new products and the “family room” is where returning customers come to learn something new or fix their products, like the Genius Bar. This obviously is very similar to the Main Street and Town Square concept he imagined for JC Penney.

“It seems like change takes place over night, but it really doesn’t,” Johnson said. “Something I learned while at Apple is ‘Every journey begins with just one step.'”