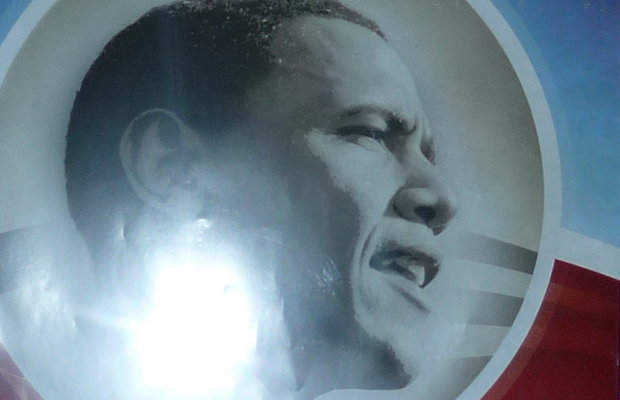 November 4, 2008. The day America elected Barack Obama as their 44th president. I was lucky being in the United States on this very special day. Today it’s November 4, 2011. It’s exactly three years after these historic elections, which gives me a reason to share some of my photos. 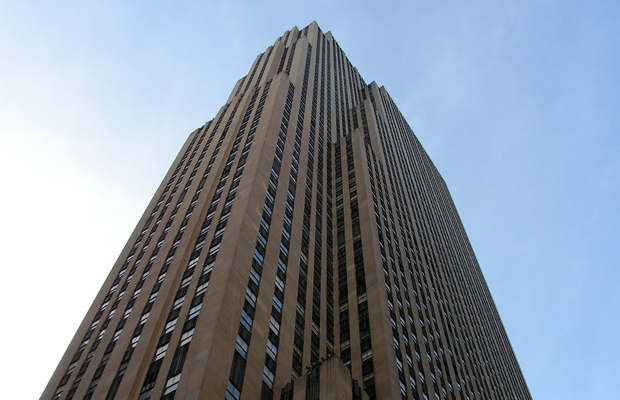 Election Day 2008. My day started like any other day. In the morning I went to Rietveld Architects for ‘just another day at the office’. For me, Election Day started at 3PM. Together with two colleagues I went to Rockefeller Center. 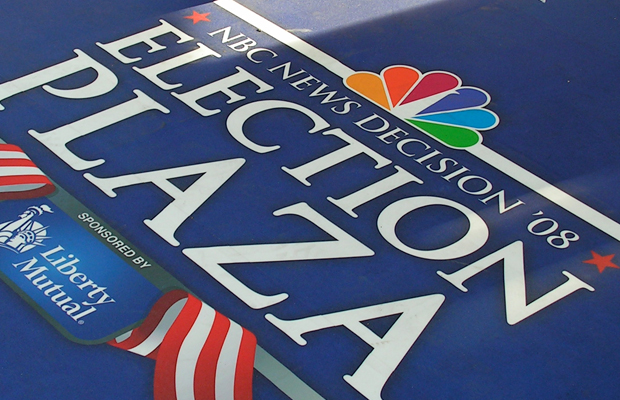 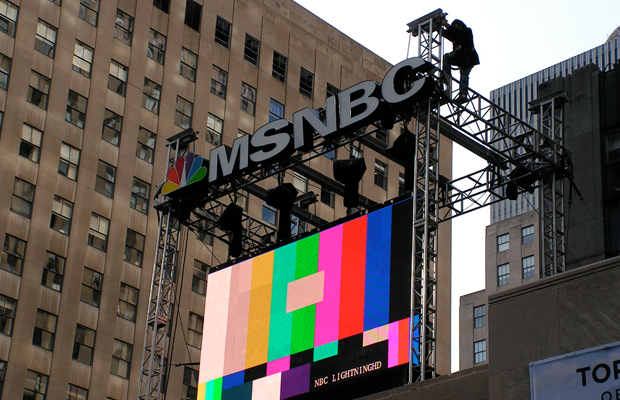 As you can see on this picture (above), preparations are almost done. 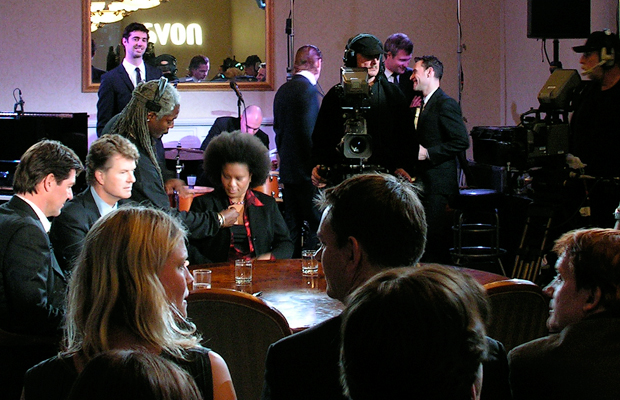 I didn’t go to Rockefeller to see these preparations at Election Plaza. A Dutch news show would broadcast live from the Rockefeller Center for their election coverage. I was part of the audience (which was really fun because my family in the Netherlands watched it live). They started broadcasting at 4PM (10PM in the Netherlands). Election night began! 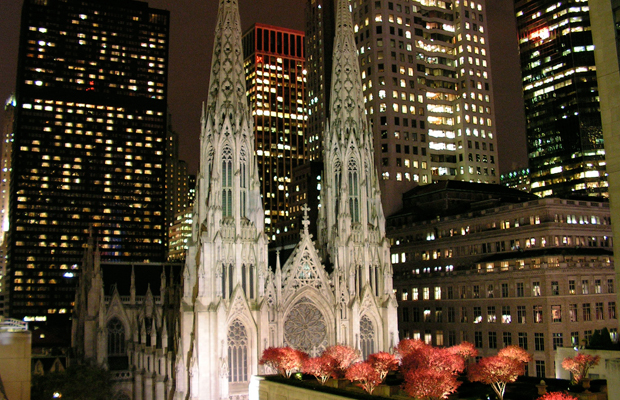 Several hours later, the sun already set, I took a photo of this incredible view of St. Patricks Cathedral (photo is taken from the news studio in Rockefeller Center). It was time to go downstairs and visit Election Plaza. 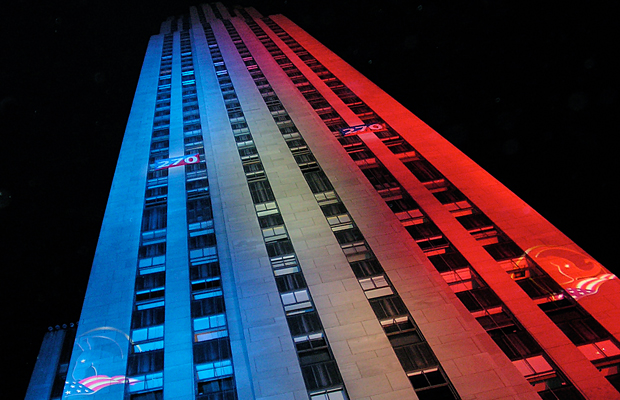 Wow! To my surprise the Rockefeller Center turned red and blue for NBC’s broadcasting. Also the skyscraper featured a running electoral count (you can see the number 270, which is the number of delegates each candidate needs to win the elections). 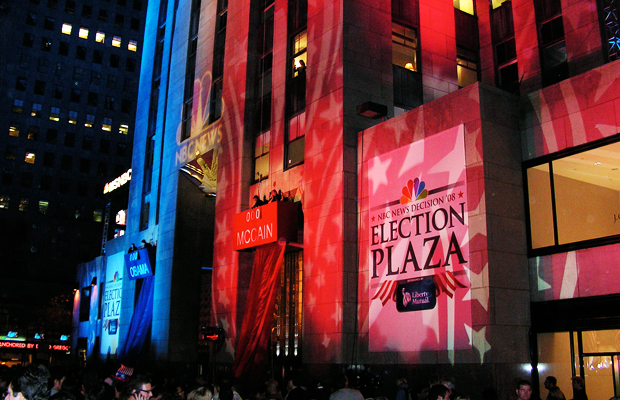 At the building two carts were pulled up. One for Obama and one for McCain. The carts ended at 270 at which stage the next president would be known. 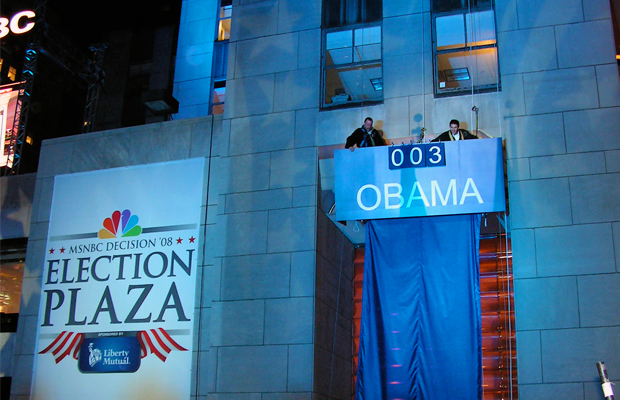 After Obama won three delegates, I together with several other people decided to go somewhere else. We figured it would be more interesting to experience the elections in Harlem, which is where we went. 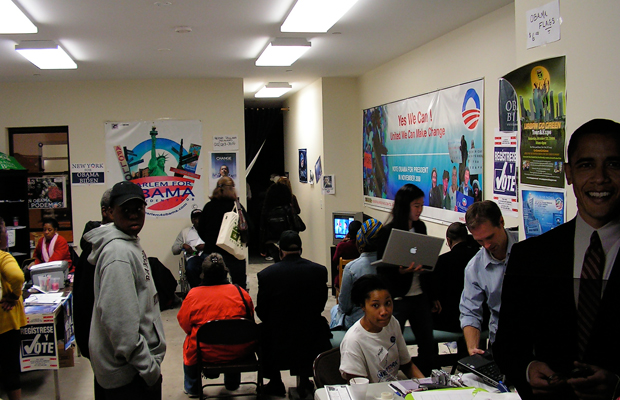 We visited an Obama campaign office in Harlem. It’s the same office where I watched several of the presidential debates. 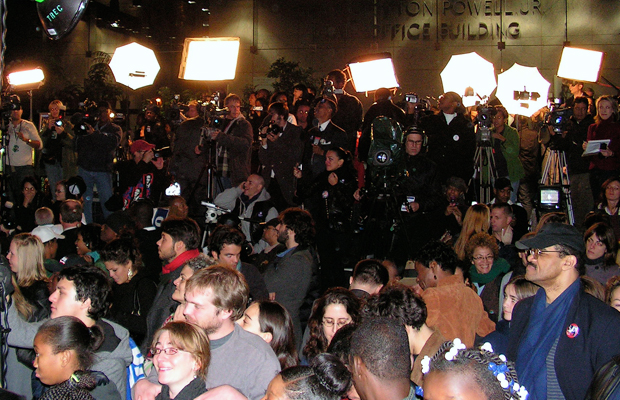 Not much later, we found out thousands of people gathered in front of the Bill Clinton Office (which is situated in Harlem). We decided to go there. On the photo above, you’ll see many camera crews from news networks all around the world. Quickly it became clear our gathering would be broadcasted live in many countries! 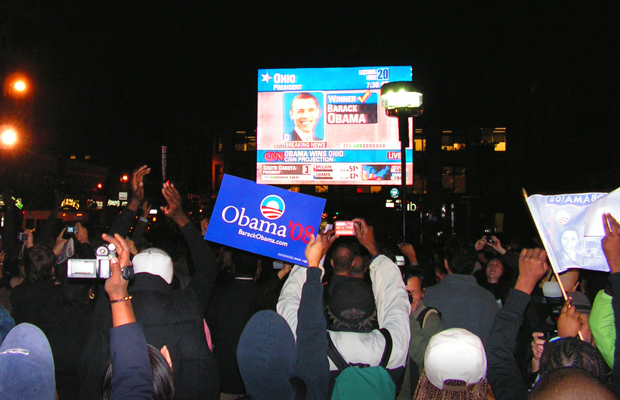 Together with thousands of people we watched CNN, who projected Obama as winner in Ohio (which was one of the crucial states). 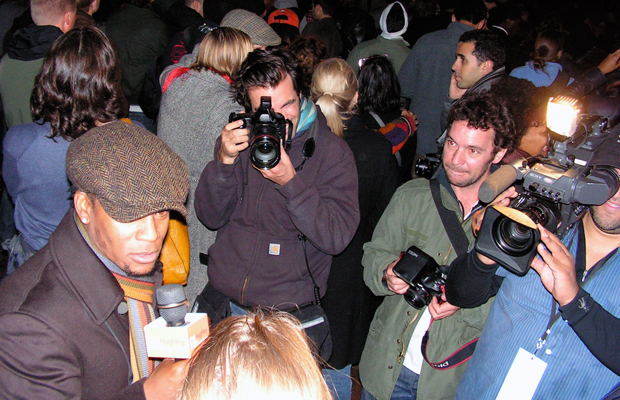 Shortly after I snapped this photograph, I was interviewed by this guy. I didn’t know who he was. Moments later he gave a speech from the podium, so I figured he must be famous. Several days after the elections I found out he’s famous indeed. He’s a well known comedian and has its own show on CNN. And… his interview with me was broadcasted on CNN! (“Even the Dutch are excited”) 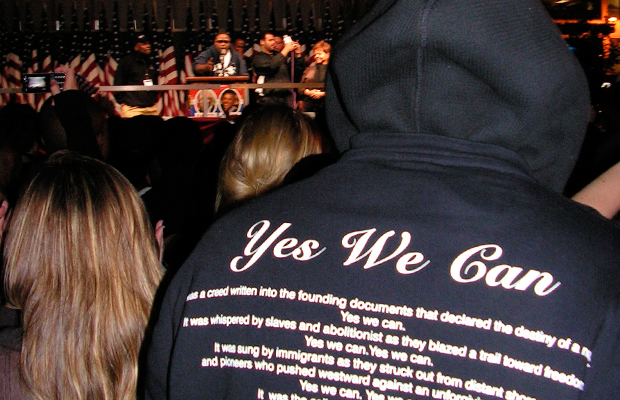 It wouldn’t take long until “Yes We Can” became “Yes We Did”. 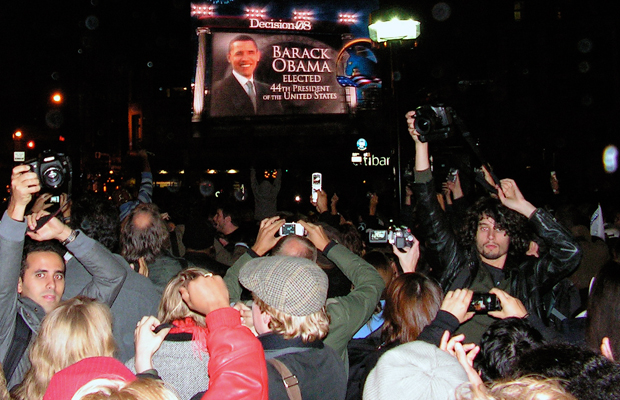 NBC projected Obama as winner of the elections. Everyone went crazy! 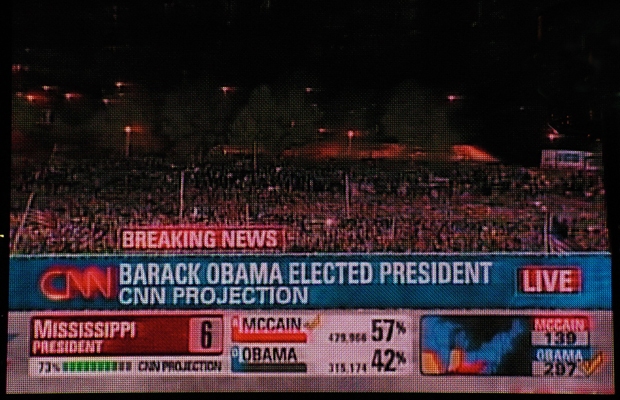 CNN also projected Obama as winner. John Mc Cain was defeated. Barack Obama would be the 44th president of the United States. 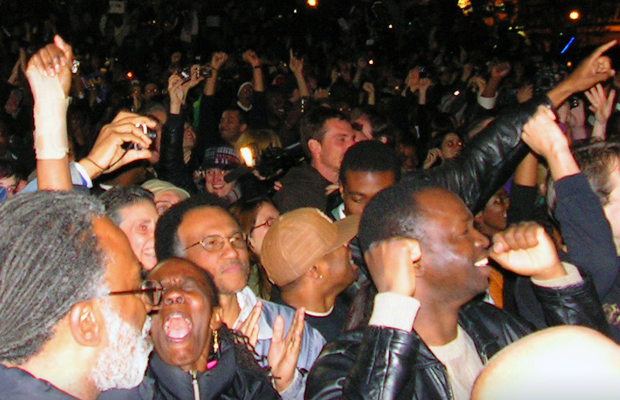 Just look at the woman in the lower left of this photo. Need I say more? 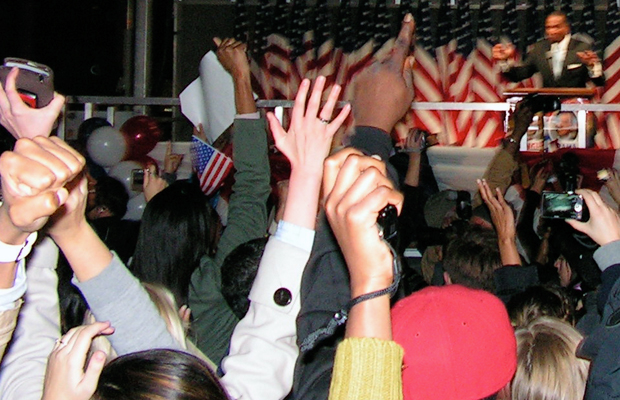 The atmosphere was euphoric for a very, very long time. 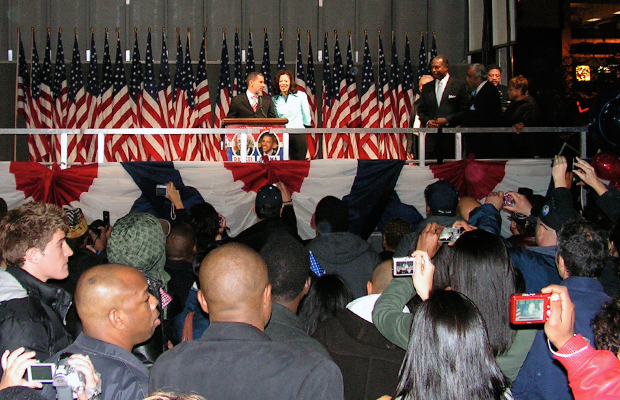 The governor of New York gave an emotional speech. 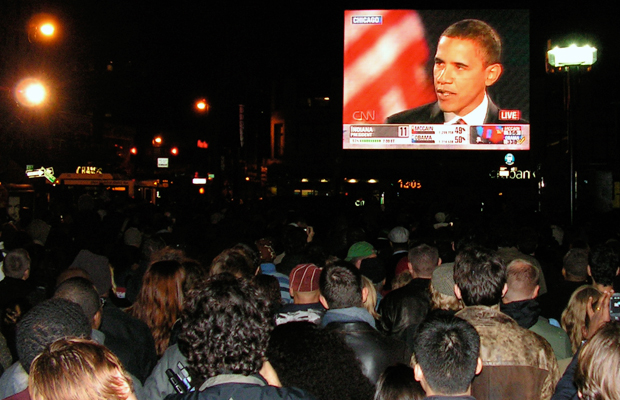 To conclude these historic elections, Obama gave his victory speech. During his speech, almost everyone was silent (except for some people shouting “Yes We Can”). 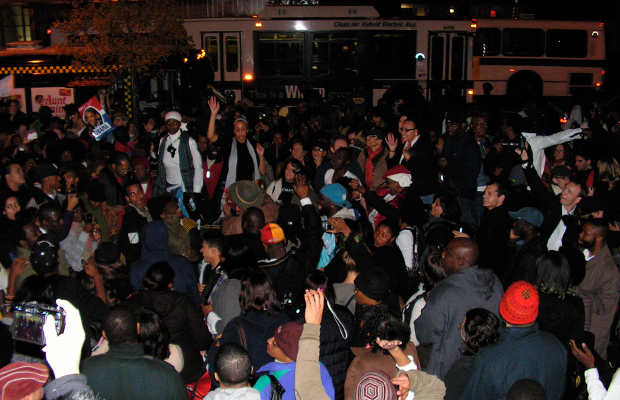 After his speech, crowds got bigger. “O-bam-A” and “Yes We Can” echoed everywhere. People were laughing, hugging and cheering. At 125th Street, crowds were pouring in from all directions. Cars cruised slowly east and west, their windows rolled down, passengers hanging out, waving and shouting. After several hours I went back to my apartment in Lower Manhattan. It was an historic night, and I had been part of it.